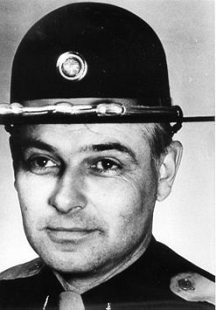 On Sunday afternoon, June 16, 1985, Trooper Whitney was working with Trooper Keith George and a patrol aircraft stopping speeding violators on I-380 near Evansdale. Whitney was handing a ticket through the driver’s side window of a violator’s vehicle when he was struck by another vehicle whose driver had apparently fallen asleep at the wheel. Whitney was killed outright, pinned against the car while the moving vehicle continued to strike both his and George’s patrol cars parked in front of the stopped speeder’s car.